The Bryce Canyon area has a long history of people in and around, what is today, the National Park. However, the area was not settled until 1874, when a group of families established the town of Clifton near the junction of the Paria River and Henrieville Creek.

A year later, Ebenezer Bryce and his family arrived in Clifton, but soon moved further upstream to Henderson Valley (New Clifton). Ebenezer helped to complete a seven mile irrigation ditch from Paria Creek. Bryce also built a road into the pink cliffs to make timber more accessible. People started to call the amphitheater where the road terminated, “Bryce’s Canyon.” Ebenezer Bryce and his family didn’t stay long however, as they moved to Arizona in 1880, but the name Bryce’s Canyon stuck. Also, only three years after it was founded, the town of Clifton was abandoned in 1877.

Bryce Canyon is not a "real" canyon. A true canyon is carved by flowing water. Water is the active ingredient here, but in the form of "frost-wedging" and chemical weathering. 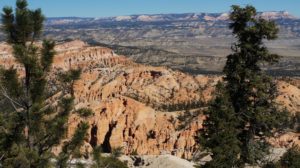 What is “frost wedging, you ask. For 200 days a year the temperature goes above and below freezing every day. During the day, melt water seeps into fractures only to freeze at night, expanding by 9%. Now as ice, it exerts a tremendous force (2,000-20,000 pounds per square inch). Over time this "frost-wedging" shatters and pries rock apart. In addition, rain water, which is naturally acidic, slowly dissolves the limestone, rounding off edges and washing away debris.

The result of “frost wedging” creates rock formations called Hoodoos. Hoodoos are tall skinny spires of rock that protrude from the bottom of arid basins and "broken" lands.

Hoodoos are scattered throughout many areas, but nowhere in the world are they as abundant as in the northern section of Bryce Canyon National Park. In common usage, the difference between Hoodoos and pinnacles or spires is that hoodoos have a variable thickness often described as having a "totem pole-shaped body." A spire, on the other hand, has a smoother profile or uniform thickness that tapers from the ground upward.

At Bryce Canyon, hoodoos range in size from that of an average human to heights exceeding a 10-story building. Formed in sedimentary rock, hoodoo shapes are affected by the erosional patterns of alternating hard and softer rock layers. The name given to the rock layer that forms hoodoos at Bryce Canyon is the Claron Formation. This layer has several rock types including siltstones and mudstones but is predominantly limestone. Thirty to 40 million years ago this rock was "born" in an ancient lake that covered much of Western Utah. Minerals deposited within different rock types cause hoodoos to have different colors throughout their height.

Unfortunately, hoodoos don't last very long. The same processes that create hoodoos are equally aggressive and intent on their destruction. The average rate of erosion is calculated at 2-4 feet (.6-1.3 m) every 100 years. So it is that Bryce Canyon, as we know it, will not always be here. As the canyon continues to erode to the west it will eventually capture (perhaps 3 million years from now) the watershed of the East Fork of the Sevier River.

While the hiking in Bryce Canyon National Park is superb, those who are unable to hike can enjoy the park’s 18-mile scenic drive, which provides access to 13 viewpoints over the amphitheaters. It’s important to note that all the overlooks lie to the east of the park road (left, as you drive south)–but that’s not to say that the western side of the road isn’t packed with jaw-dropping scenery. To avoid cutting across traffic, it is recommended that you drive all the way south, then stop at the overlooks on your way back. If you only have a short amount of time, make sure you stop at Sunrise, Sunset, Inspiration, and Bryce viewpoints!

In Bryce many people use the road mostly to access the trailheads, but if you’re not hiking, here’s a tip to help you get a good look at some of the best scenery: Just after passing the park boundary (and before the entrance/fee station) watch on your left for the road to Fairyland Canyon. Many visitors, in their eagerness to enter the park, miss this viewpoint just one mile off the main road that allows you an up-close view of the red rock spires. The fantastic hoodoos you see below, and for which Bryce is so famous, were explained by the Paiutes Indians as “legend people” who had been turned to stone.

Due to congestion on the park road, trailers are not allowed beyond Sunset Campground, and vehicles longer than 25 feet are not allowed at Bryce Point or Paria View. You may leave your trailer in the visitor center parking lot. There is a free voluntary shuttle bus system, operating May through early October (8 a.m. to 8 p.m. daily), will take you from Ruby’s Inn or the visitor center to all the park’s overlooks and trailheads.

If you want to experience scenic driving through Bryce Canyon National Park, but don’t want the hassle of dealing with traffic, take the shuttle. The shuttle runs between the shuttle area outside the park and trails in the main, upper amphitheater, which makes an excellent option to avoid crowded parking lots during busy summer weekends. The shuttle can also conveniently drop you off and one trailhead and pick you up at another, negating the need to retrace your steps.

Getting away from the road and hitting the trails is a great way to take in the superlative scenery Bryce Canyon National Park has to offer. The Mossy Cave Trail (one hour) and Bristlecone Loop Trail (one hour) are great short hikes for families with small children. The Rim Trail (5–6 hours) section between Sunset and Sunrise Points is paved and gives awesome views of hoodoos from above. And the Queen’s Garden Trail (1–2 hours) offers hikers the easiest access into the canyon. These trails are moderate hikes. The Navajo Loop (1–2 hours), and Tower Bridge (2–3 hours), are also moderate hikes. Fairyland Loop (4–5 hours), and Peekaboo Loop (3–4 hours) are strenuous hikes. Several of these trails intersect, allowing hikers to combine routes for more challenging hikes.
The park also has two trails designated for overnight hiking: the 9-mile Riggs Spring Loop Trail (1 to 2 days) and the 23-mile Under-the-Rim Trail (2 to 3 days).[25] Both require a backcountry camping permit. In total there are 50 miles (80 km) of trails in the park. Be sure to stop by the visitor center for a backcountry permit ($5-15) as well as a map and additional Bryce Canyon information that could come in handy on your hike.

A camping experience in Bryce Canyon National Park is one you won’t forget. Nothing beats seeing the sunrise and set while throwing otherworldly pink and orange light off the hoodoos, or stargazing on a moonless night.

Bryce has two campgrounds, Sunset Campground and North Campground, and both have drinking water and pull-through sites, but no hookups. Both campgrounds also accept reservations which is a good idea, because these campgrounds are popular and fill up fast. If you don’t have a reservation, make sure you arrive early in the morning to increase your odds of securing a site. The campgrounds are both located in ponderosa pine forests that offer some shade.

Bryce Canyon offers world-class stargazing due to its exceptionally high air quality and long distance from sources of light pollution, leading some to call it the “last grand sanctuary of natural darkness.” Amateur astronomers will find Bryce to be a prime destination to set up a telescope and observe celestial events, where you can observe some of the 7500 stars that can be seen on a moonless night, along with the incredibly bright, silver Milky Way stretching across the sky. Planets like Venus and even Jupiter shine bright enough to cast your shadow on the earth.

Because Bryce Canyon National Park is at an elevation of 8,000 to 9,000 feet, when it snows there are wonderful opportunities for winter sports like snowshoeing and cross-country skiing. something you won’t find in many other national parks.

If you’re on your own, the Rim Trail between Bryce Point and Fairyland Point is a good option for cross country skiing or snow shoeing, as well as the Bristlecone Loop and Paria Ski Loop.
Sometimes the snow conditions are firm and better for hiking in boots. If you are winter hiking in boots, it’s a good idea to put on a traction device so you don’t slip.